Eels have started to forget about humans during the COVID-19 pandemic.
Click here for more quirkiness 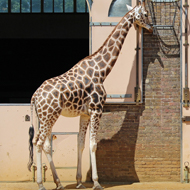 Rescue package announced for zoos and aquariums in England

Zoos and safari parks in England set to reopen

Species a risk to honeybees and other pollinator

Rising water temperature could affect the cognitive abilities of minnows.

Police called out to multiple cases across the UK.