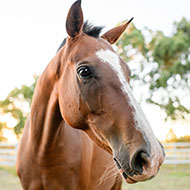 Keepers of all Equidae are being reminded to maintain high standards of biosecurity and report any susect clinical signs promptly.

Government officials are monitoring an outbreak of glanders in Turkey after the World Health Organisation (OIE) reported three cases of the disease in the country.

Glanders is an often-fatal condition caused by the bacteria Burkholderia malle, primarily affecting horses, donkeys and mules. The disease is spread through close contact with infected animals, or via food and water contaminated with discharges from the respiratory tract or ulcerated skin lesions of contaminated animals.

On Friday (10 January), Defra/the APHA's International Disease Monitoring Team published a preliminary outbreak assessment of the situation after glanders was reported in Turkey for the first time since 2017.

The first three of the outbreaks were confirmed on the 23 December 2019 during a routine screening. Two of these outbreaks were identified in the Mudurnu district in North-West Turkey, where 10 out of 85 susceptible horses tested positive for the disease and were subsequently culled.

Officials identified the third case in the Adalar Region of Istanbul, where certain permissions and conditions must be met to move horses in line with the 2018/1301 EC Directive. The animals are reported to have been brought into the district illegally, without microchips, identification documents or veterinary health certificates.

A fourth outbreak was reported on 30 December 2019 in a single horse in the Merkez district, some 260km south-west of the initial outbreaks. A private veterinary surgeon suspected glanders via the clinical signs and a mallei test identified the disease. This region is not approved for export of Equidae to the EU.

The International Disease Team said that it is continuing to monitor the situation and is reminding keepers of all Equidae ‘to maintain high standards of biosecurity and report any suspect clinical signs promptly.’

For more information about glanders and its clinical signs, vist at www.oie.int