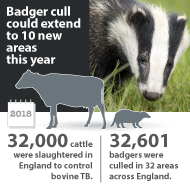 Members of the public are being urged to write to their MP following reports that the badger cull could be extended to 10 new zones this autumn.

The call from Derbyshire Wildlife Trust follows reports that Natural England is reviewing the badger cull applications for 2019. In a statement on its website, the Trust said that Derbyshire is one of 14 zones currently under consideration by MPs.

Derbyshire Wildlife Trust runs the UK’s largest badger vaccination programme. Over the last six years, more than 100 volunteers have been working to stop the spread of bovine TB and prevent a cull in the county.

Tim Birch, head of living landscapes at Derbyshire Wildlife Trust, said: “Despite the Trust’s successful vaccination programme, the Department of Environment, Food and Rural Affairs (Defra) have listed the county for the cull expansion this year.”

“That means the badger cull could come here as soon as early September. We’re deeply concerned that this could result in the deaths of thousands of healthy badgers including ones that have been vaccinated – it would cause significant disruption to our ongoing badger vaccination programme."

He continued: “Our work is widely supported and has had £280,000 worth of Government funding and studies show no evidence of widespread Bovine TB in Derbyshire’s badgers. Our dedicated team will continue vaccinations despite the potential arrival of a cull to look after this iconic and protected British species.”

A Defra spokesperson said that Natural England is currently reviewing the badger cull applications for 2019 and that a decision will be made public ‘in due course’.

“Bovine TB remains one of the greatest animal health threats to the UK, causing devastation for hard-working farmers and rural communities,” he said.

“There is no single measure that will provide an easy answer to beating the disease. That is why we are pursuing a range of interventions to eradicate the disease by 2038, including tighter cattle movement controls, regular testing and vaccinations.”

Natural England has so far authorised minimum four-year licensed badger control operations for 32 areas of England including Cornwall, Devon and Somerset. If the expansion is approved, it would bring the total number of cull zones to more than 40.