Cookie use on MRCVSonline
We use cookies to ensure that we give you the best experience on our website. If you continue without changing your settings, we will assume that you are happy to receive all cookies.
Accept Policy
Change cookie settings
Urine dipstick test for proteinuria in cats innacurate, study suggests 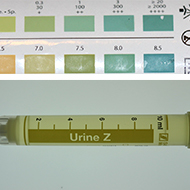 "These findings indicate that clinicians should not rely on the results of the urine dipstick test in combination with USG in cats for detecting proteinuria."

Vets urged to use other quantitative methods to detect the condition in felines.

The urine dipstick test is not accurate for detecting proteinuria in cats, even when combined with urine-specific gravity (USG), according to new research.

The research, published in the Journal of Small Animal Practice (JSAP), assessed the utility of the urine dipstick alone and when associated with the USG for detecting proteinuria in cats.

For the study, researchers reviewed the clinical records of cats presented to a referral hospital between January 2011 and January 2017. For the feline urine samples to be eligible for inclusion, they had to have undergone a complete urinalysis, including dipstick evaluation, USG and urine protein-to-creatinine (UPC) measurement.

A total of 121 feline urine samples were included, and diagnostic agreement and test accuracy were calculated for the dipstick test alone and when combined with the USG, utilising different cut-off values were used for proteinuria. Receiver-operating characteristic (ROC) curves were also calculated.

Corresponding author, Jorge Pérez-Accino, explained: “The diagnostic agreement between the urine dipstick and UPC ratio was poor and did not improve if the USG was considered together with the dipstick. A dipstick result of equal or greater than “Trace” (0.1-0.3g/L) had a sensitivity of 81 per cent and a specificity of 31 per cent to detect proteinuria.

“With regards to the ROC curves, the area under the curve (AUC) of the urine dipstick alone was poor (0.57). When combined with the USG results, this improved to fair (0.78) but the specificity and negative predictive value (NPV) were still low.”

JSAP editor, Nicola Di Girolamo, concludes: “These findings indicate that clinicians should not rely on the results of the urine dipstick test in combination with USG in cats for detecting proteinuria. Instead, other quantitative methods, such as UPC ratio, should always be performed to detect proteinuria in cats.”