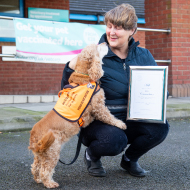 A recovery assistance dog from Leicester, named Milli, has been awarded with a PDSA Commendation in recognition of her devotion and support of her owner.

Ten-year-old Milli has been with her owner Liz Maitland since she was a puppy. Ms Maitland says she has always struggled with her mental health, and was encouraged to adopt an animal companion after a particularly dark period in her life.

“I struck up an immediate bond with Milli, she made me feel at ease and I knew I now had someone who would always be there for me,” She said.

“I learned a lot about the benefits of recovery assistance dogs and I decided to train Milli to be one. Her presence keeps me calm and if I ever feel stressed or anxious, she makes me feel safe. Whenever I feel uncomfortable Milli will touch me for reassurance and put space between me and other people.

In 2004, Ms Maitland set up the charity RECOVERY Assistance Dogs (RAD), which works to provide training for dogs like Milli and raise awareness about the benefits of dog ownership for mental health and wellbeing.

Mr Shanks commented: “The strong bonds between pets and people are well-documented. As well as providing companionship, our research shows they can play a crucial role in helping improve people’s mental health. Milli has been a constant source of comfort and safety, and I am delighted that their bond has inspired Liz to help other people who need support from companions like Milli.”