Cookie use on MRCVSonline
We use cookies to ensure that we give you the best experience on our website. If you continue without changing your settings, we will assume that you are happy to receive all cookies.
Accept Policy
Change cookie settings
MEPs call for stricter measures to stop illegal pet trade 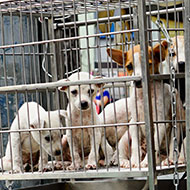 The resolution called for a common EU definition of puppy and kitten farms.

The environment, public health and food safety committee have adopted a resolution which demands action to tackle the illegal trafficking of pets.

Recognising the negative impact that the illegal pet trade has on animal welfare, public health and consumer protection, the European Parliament also wants to clamp down on the affect that the trade has on the function of the EU internal market.

The decision is informed by strong public support for the improvement of animal welfare. According to a public opinion pole by the European Commission, 74 per cent of EU citizens believe that companion animals should be better protected.

Adopted on Tuesday 21 January, the resolution calls for a series of actions to address the illegal pet trade, including:

The committee also expressed the need for EU breeding rules for pets, along with registers of authorised breeders and sellers, and the importance of encouraging the public to adopt rather than buy.

MEPs are expected to vote on the resolution at the plenary in February.