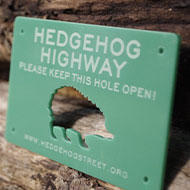 Each hedgehog hole will be marked with a special plaque so the highways do not get accidently blocked.

British housebuilder Bovis Homes is set to roll out hedgehog ‘highways’ in all of its existing developments as part of an industry-first campaign to protect hedgehogs and other endangered animals.

The developer has joined forces with the British Hedgehog Preservation Society (BHPS) with a commitment to introduce highways to all future sites ‘wherever possible’. It is hoped the move will allow hedgehogs to move freely between gardens and provide easy access to frogs, birds, insects and other small mammals.

“We are proud to be the first housebuilder aiming to roll-out hedgehog highways as standard across current locations and our new developments, to help one of the nation’s favourite animals roam freely at night between gardens,” commented Louise Macrae, regional marketing manager for Bovis Homes.

“As part of our new sustainability steering group, protecting hedgehogs and the environment is at the forefront of what we want to achieve and we are delighted to join forces with the British Hedgehog Preservation Society and take the lead in the housebuilding industry.”

Bovis Homes is developing the highways - small holes placed at ground level in fencing and other barriers - to allow hedgehogs and other wildlife to connect and access other gardens. Each hole will be marked with a plaque, so they do not get accidently blocked, and customers will be given literature so they can understand how best to help hedgehogs.

“We are delighted that Bovis Homes is making this important pledge to help our dwindling population of hedgehogs,” commented Faye Vass, chief executive of BHPS. “Creating holes for hedgehogs in fences and walls is a simple step but it could have a huge impact on the amount of habitat available for hedgehogs following the development of a site.

“There are many small actions we can all take to help hedgehogs in our gardens and green spaces, and joined together those small actions can make a huge difference to a species under threat.”

Figures from the latest State of Britain's Hedgehogs report, published in 2019, show that urban hedgehog populations have fallen 30 per cent since the turn of the century, and rural numbers have fallen by 50 per cent.

Conservationists say that, if all new housing developments were built with wildlife in mind, they could play a vital role in the recovery of hedgehog populations.

To further support conservation work, Bovis Homes has donated £5,000 to the BHPS and has partnered with national project Hedgehog Street - a joint initiative between BHPS and People’s Trust for Endangered Species. It will also be installing hedgehog homes in green spaces to encourage hedgehogs to hibernate and raise their hoglets.