Cookie use on MRCVSonline
We use cookies to ensure that we give you the best experience on our website. If you continue without changing your settings, we will assume that you are happy to receive all cookies.
Accept Policy
Change cookie settings
Giraffes to be given greater protection against unregulated trade 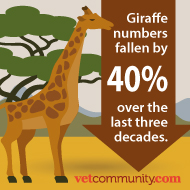 Fewer than 100,000 giraffes are estimated to remain in the wild today.

Giraffes are to be given greater protection against unregulated trade after a vote by the Convention on International Trade in Endangered Species (CITES).

The move comes in response to the fact that giraffe numbers have fallen by as much as 40 per cent over the past decade. Fewer than 100,000 giraffes are estimated to remain in the wild today owing to poaching, habitat loss for agriculture and human-wildlife conflict.

Giraffes are hunted for their bushmeat, but their body parts are also used for clothing, furniture, and speciality knives.

According to BBC News, the motion to regulate the trade in body parts came from Kenya, Chad, the Central African Republic, Senegal, Mali and Niger. Here there has been a significant fall in giraffe populations.

But South African countries opposed the move, stating there was not enough evidence to support the notion that international trade was contributing to the giraffe’s decline.

Under the new rules, permits will be mandatory and countries will be required to record the export.

But Julian Fennessy from IUCN’s giraffe and okapi specialist group said the protection was “not going to save giraffe in the wild”. He argued that increased financial and political support was needed, as well as more resources on the ground.