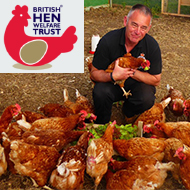 A prison in Dorset has adopted 200 hens that would otherwise have been sent to slaughter, as part of a new initiative to help prisoners.

HMP Guys Marsh is a Category C prison that holds up to 450 men, some of whom have committed serious crimes.

Wayne Walters, a livestock and project management instructional officer, launched Project Jail Bird to help the men cope with life in prison, as well as aiding their rehabilitation and release.

With the help of Prisoner J (who cannot be named for legal reasons), Wayne transformed an unused area of the prison into a haven for the hens. It is complete with handmade flower boxes crafted by the prisoners, which sit on the outside of a newly erected coop.

The hens had previously been living on a commercial farm laying eggs to be sold in supermarkets, or to be put into processed foods. At 18 months, they had reached the end of their commercial life and would have faced slaughter had they not been rescued by the British Hen Welfare Trust.

Jane Howorth, MBE and founder of the trust, personally delivered the birds to Guys Marsh with the charity’s head of operations, Gaynor Davies.

She said: “What really struck me was the effort that both Wayne and Prisoner J had put into Project Jail Bird. They have created a fantastic facility for hens out of wasted space, and in so doing given the prisoners at Guys Marsh the opportunity to learn new skills, and of course given the hens a wonderful second chance in life.

“The charity has supplied hens to almost a dozen prisons across the UK and I wholeheartedly support Wayne’s initiative seeing only benefit in rolling out the model across all UK prisons.”