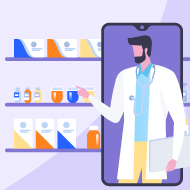 The global telemedicine market is expected to reach $62 billion by 2025.

Telemedicine and the debate surrounding 'under his/her care'

Telemedicine is defined by the RCVS as ‘the use of electronic communication and information technologies to provide clinical healthcare’. Traditionally it referred to specialists being available for remote consultation with general practitioners. But new forms of telemedicine are emerging every day. Many telemedicine businesses now offer services such as video consults, wearable tech and live web chats.

Telemedicine has grown substantially both in the human and veterinary medical professions, so much so that it has promoted concern among vets over its implications for animal welfare. This article explores some of the debates surrounding this contentious issue.

In June, the RCVS announced that it was going to be conducting a ‘wide-ranging review’ of various key provisions to the RCVS Code of Professional Conduct. Among these included the meaning of an animal being ‘under the care’ of a veterinary surgeon. The RCVS also announced that its proposed telemedicine trial would be postponed ‘for the foreseeable future’.

The decision came after committee meetings, public consultation and external legal advice which revealed several anomalies in the existing guidance. According to a summary of the RCVS consultation, some 69 per cent of respondents did not want the definition of ‘under his/her care’ to be changed to allow vets to prescribe medicines where there has been no physical examination of the animal.

The RCVS’ decision about telemedicine and remote prescribing was criticised by the BVA for being agreed in a closed session at RCVS Council. In a letter to RCVS president Amanda Boag, BVA president Simon Doherty said the RCVS had approached the issue in a way that appeared to exclude the veterinary profession:

‘The RCVS had given us assurances that there would be high levels of stakeholder engagement in discussions on telemedicine, so it’s both disappointing and unexpected that some seven months later the first update is a large-scale review, agreed behind closed doors,’ he wrote.

‘Telemedicine presents both challenges and opportunities for the veterinary profession and we need to strike the right balance between being open to change and new technologies while ensuring that animal health and welfare remains paramount’.

His words were echoed by veterinary surgeon Jonathan Wray who, in a letter to Vet Times, accused the RCVS of ‘bunker behaviour’. Jonathan said that recently published papers from the meeting withheld information on costs and failed to acknowledge general practitioners.

The RCVS issued a formal response to the comments, confirming that it held the session in private owing to confidential legal advice. The College added that while it is still too early to have worked out the details of the agreed review, it will be “open and inclusive” in parallel with previous consultations.

“‘Under his/her care’ should be mandatory”

Another member of the profession who has expressed concern over the issue of telemedicine is veterinary surgeon Richard Weston. Richard, who is clinical director at Anrich Veterinary Hospital and Referral Centre in Wigan, is among a group of 11 independent vets who have lobbied the RCVS about telemedicine, specifically regarding the guidance of 'under his/her care'.

Richard offers telemedicine to his clients, whose pets he sees regularly and to whom he provides a prescription (his practice bases its repeat prescription policy on a maximum of six months between examinations). However, he is opposed to remote prescribing where a prescription can be obtained without the animal having been examined by the prescribing vet.

Speaking to MRCVSOnline, Richard said that while the RCVS has shelved remote prescribing for the foreseeable future, it is something that, in his opinion, should be shelved permanently. He believes that the provision 'under his/her care’ should be mandatory so that it can be explained to clients who question the need for the animal to be seen.

“Remote prescribing is something that should never be considered in our profession or the human profession because you can’t prescribe a medicine that you haven’t seen the animal for,” he said. “If an animal is under any treatment other than worming of flea medication then it should be seen every six months to receive a repeat prescription.”

Richard says the term ‘under his/her care’ is just the beginning of all the questions that need to be asked about telemedicine. He maintains that the secrecy surrounding the RCVS’ decision to delay a trial is because two of its panel members are directors at corporate practices, and that most telemedicine businesses are motivated by profit.

He gave an example of a teleconsult that took place with one of his receptionists. During the consult, his receptionist was referred to three practices in the local area, but not his own. Richard believes this happened because the telemedicine company was managed by a corporate, which owned the three referral practices.

A group of independent vets are said to be calling for an extraordinary general meeting (EGM) of the Council. But Richard is in two minds about this because he feels independents are not big enough to compete with the corporates. He says that if corporate practices were also to call for an EGM, then this would have more effect.

Richard adds: "The RCVS need to bring independent vets on board to discuss the issue. "It's independent against corporates because we don't have the money as independent practices to be able to [practice telemedicine]. There's no way in the world that I could spend a salary having a vet sitting at a computer trying to make a diagnosis when the animal needs to be seen."

The future of animal health?

With the global telemedicine market expected to reach $62 billion by 2025 (Zion Market Research), it is true that telemedicine is going to shape the future of both human and animal healthcare. With this comes many benefits, such as providing easy access to specialist advice, allowing clients to show symptoms as they occur and enabling more accurate triaging of emergency cases. The concerns raised about the potential risks, however, shows there are still many obstacles to overcome and numerous discussions to be had.

Full details about the RCVS plans for the review are expected in the coming weeks.