Cookie use on MRCVSonline
We use cookies to ensure that we give you the best experience on our website. If you continue without changing your settings, we will assume that you are happy to receive all cookies.
Accept Policy
Change cookie settings
Dogs sniff-out lung damage bacteria in cystic fibrosis research 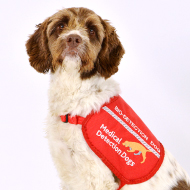 Lizzie, one of the three Medical Detection Dogs that worked on the trial.

Medical detection dogs could be used to identify the bacteria that cause lung damage in cystic fibrosis (CF) before it takes hold, according to new research.

Findings published in the European Respiratory Journal show that medical detection dogs have a very high level of accuracy when asked to identify bacteria associated with serious lung infections.

One of the leading causes of lung damage in CF is infection with bacterial pathogens, the most prevalent being Pseudomonas aeruginosa (Pa). Pa chronically infects some 60 per cent of the 10,000 patients in the UK by adolescence and adulthood.

The study was conducted by Imperial College London and Royal Brompton Hospital, in collaboration with Medical Detection Dogs, supported by the Cystic Fibrosis Trust.

“This is a really exciting development. Advanced technology to detect infections, for example in breath, has proved difficult so far,” explained Professor Jane Davies, from Imperial College London. “The successful training of the dogs on cultured samples will now be used as the foundation for testing patient samples directly.”

In the study, researchers assessed the ability of four dogs to detect Pa from other CF-causing bacteria. The bacteria were grown in the laboratory, filtered out of the solution and presented to the dogs.

The dogs were trained and tested on customised sample presentation stands. During the training period, the dogs were rewarded for identifying Pa correctly with food and the sound of a click.

After training, the dogs were given Pa-positive samples, other cultured bacterial controls or sterile liquid in a random, computer-generated sequence. The dogs indicated a positive sample by stopping or sitting down and were rewarded if correct.

The samples were then presented to the dogs in a double-blind testing scenario.

“The findings of this world-first study into the ability of dogs to detect Pseudomonas are yet another indicator of their remarkable contribution to saving human lives,” commented Dr Claire Guest, Chief Executive and co-founder of Medical Detection Dogs.

“Pseudomonas is a condition that affects thousands of people each year in the UK alone. I can assure them that Medical Detection Dogs is working very hard to find effective, affordable and sustainable ways to manage their condition.”