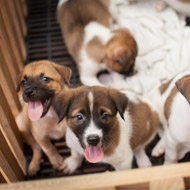 The new regulations will also see a ban on licensed sellers from dealing in puppies and kittens under the age of eight week.

A new “star rating” system for dog breeders, pet shops and others came into effect on Monday (1 October) under new government regulations set to strengthen animal welfare in England.

The system aims to help buyers find the best breeders and assist local authorities in regulating businesses that deal with animals, such as through more welfare inspections and shorter licences. The legislation rates business out of five on welfare and other grounds and applies to:

The initiative is one of a series of measures that have come into effect under the Animal Welfare (Licensing of Activities Involving Animals) (England) Regulations 2018. These will ensure breeders must show puppies alongside their mother before a sale is made and will tighten regulations so that puppy sales are completed in the presence of the new owner – preventing online sales where prospective buyers have not seen the animal first.

Animal Welfare minister David Rutley said: “These regulations will end mistreatment and malpractice of puppies and crack down on unscrupulous breeders so pet owners will have no doubt their new dogs have had the right start in life.

“The licensing systems for businesses that work with animals have not been reformed for almost fifty years. The changes in place from today simplify these into one system for local authorities, help consumers to make better-informed decisions and will further improve animal welfare."

He continued: “These changes form part of our efforts to ensure we have the highest animal welfare standards in the world. This includes making CCTV cameras mandatory in all slaughterhouses as well as our plans to increase prison sentences from six months to five years for animal abusers.”