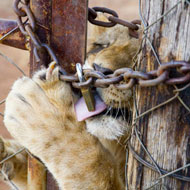 The Born Free Foundation is calling for South Africa’s commercial lion breeding industry to be shut down.

Cites agreed to ban the international trade in bones and other body parts from wild lions at a meeting in Johannesburg in October, but South Africa was permitted to continue trading the body parts of captive lions, on the proviso that they introduce an annual quota.

The Born Free Foundation is calling for South Africa’s commercial lion breeding industry to be shut down, saying the export quota will stimulate demand in Asia for tonics containing lion bones, and lead to increased poaching to meet the demand.

Commenting on the proposed quota, Born Free president, Will Travers OBE said: “This will, in turn, put already beleaguered wild tigers, as well as lions, at greater risk from poachers seeking a quick profit by laundering bones from wild lions and other big cats into the trade.”

Across South Africa, up to 8,000 lions and other big cats are kept on 200 or more breeding farms, where they are intensively bred and later released into enclosures to be shot by trophy hunters in so-called ‘canned hunts’. Their bones and other body parts are then sold to international markets as a replacement for tiger bones in tonics.

South Africa declared exports of more than 3,000 captive-bred lion skeletons to South East Asian countries in 2013 alone. Skeletons can be sold to dealers for over $2,000, according to the Born Free Foundation.

As few as 20,000 lions now occupy eight per cent of their historic range across Africa. In 2016, the IUCN estimated that lion populations have fallen by 43 per cent across the continent in just over two decades. And further devastating declines are expected unless concerted conservation action is taken.

The international trade in lion body parts, particularly bones, has been identified as a key threat to the species by lion range states. Other major threats include loss of habitat, declining prey species and human-wildlife conflict.

The South African Department of Environmental Affairs invited comments on the proposed quota by 2 February.

Mr Travers added: “We call on the South African authorities to reverse this decision and adopt a precautionary approach by establishing a zero export quota without delay.”