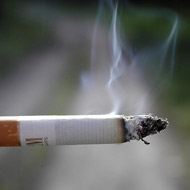 “Many owners who smoke have never thought about the effects of their habit on their pets" - Ross Allen, BSAVA.

Vets provide another reason to quit this Stoptober

Following the introduction of legislation which forbids drivers to smoke with children in their car, the BVA and the BSAVA are urging pet owners to avoid smoking for the sake of their pet's health too.

The devastating consequences of passive smoking on humans is well known, however vets are worried that many pet owners may be inadvertently harming their four-legged friends when they are together in an enclosed space.

The legislation banning smoking in cars coincides with the NHS campaign Stoptober which encourages smokers to quit throughout the month of October.

“Most smokers understand that lighting up around children is harmful, but fewer people are aware of the impact passive smoking can have on their pets, " says BVA president and companion animal vet Sean Wensley.

"Sadly this health impact, as in people, may be cancer and owners are often understandably distressed when they realise that their pet’s cancer may be the result of secondary tobacco smoking.

"This legislation doesn’t apply to animals but we hope owners will take this opportunity to protect their pet either by quitting or by keeping their car and home smoke-free.”

A recent study clearly demonstrated a correlation between the levels of nicotine in a dog's fur and its exposure to cigarettes in the home.

The research, funded by the BSAVA's PetSavers charity, showed that many dogs are inhaling and probably ingesting cigarette smoke that is known to increase the chance of pets developing cancer.

Ross Allan, of the British Small Animal Veterinary Association, said: “Many owners who smoke have never thought about the effects of their habit on their pets, but there is evidence that tobacco smoke increases the risks of lung and nasal cancers in dogs and of lymphoma in cats.

"As veterinary surgeons we champion the prevention of illness and disease, and many owners might be more likely to give up tobacco for the sake of their pet if they realised the consequence of their smoking.”