Cookie use on MRCVSonline
We use cookies to ensure that we give you the best experience on our website. If you continue without changing your settings, we will assume that you are happy to receive all cookies.
Accept Policy
Change cookie settings
British Hen Welfare Trust raises concerns about Brexit uncertainty 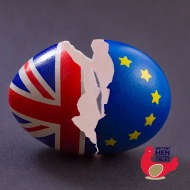 The UK egg sector is hugely successful, with around 13 billion eggs eaten every year in the country. 87 per cent of these eggs are produced here in the UK.

In a recent statement, the British Hen Welfare Trust (BHWT) discussed its concerns over the future of the British egg industry following Brexit.

The primary concern expressed in the statement is that if tariffs are removed – which the government has suggested will happen in the event of a no-deal Brexit – then a flood of cheaper eggs produced to lower standards will hit the UK market, as producers from countries where battery farming is legal will be able to undercut UK farmers.

BHWT, the NFU and the British Free Range Egg Producers Association (BFREPA) have confirmed that they will continue to urge the government to preserve this important industry, through upholding animal welfare standards and protecting free range egg farmers.