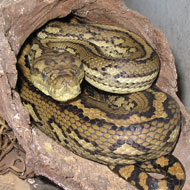 “Any reptile expert would say the same: that the snakes’ reaction to their predicament was completely inevitable."

Animal charity Wild Welfare has raised concerns about physical and psychological harm to snakes in a recent episode of I’m a Celebrity, Get Me Out of Here.

The charity said it believes two snakes were harmed during a challenge where a female contestant placed her hand into a small compartment containing the snakes, prompting one of them to lunge at her several times and appear to bite.

Field director and herpetologist Dave Morgan said: “This situation would have caused the snakes quite extreme physical and psychological harm. It was a highly stressful situation that did not allow the snakes the recourse of escape, so forcing them to react in the only way they knew how.

“Any reptile expert would say the same: that the snakes’ reaction to their predicament was completely inevitable. By intentionally placing the snakes in such a stressful situation, they were forced to attempt to bite. And for what? For sheer sensationalism. The animal’s welfare wasn’t the main consideration, it was shock value and viewer entertainment.”

Wild Welfare’s projects director, Georgina Groves, added: “It’s completely inappropriate to place any animal in an intentionally stressful situation like this, with no way of escape and the only option to act to defend themselves. It is unacceptable to deliberately cause animals harm in this way.”

Carpet pythons have small, solid teeth that face backwards in their mouths. Wild Welfare said it is likely they would have hooked into the contestant’s skin. When she then snatched her hand out of the compartment, the snake would have been pulled from the floor, dangled, then dropped from a height. It is thought this would cause several teeth to be snapped off or pulled out.

Being wrenched could also cause long-term spinal issues for the snake. Meanwhile, the charity said the contestant would likely have received only a superficial scratch or tiny skin punctures.

Groves said I’m a Celebrity has a “great opportunity” to educate people about unique species in a way that does not compromise their welfare. The charity has written to producers at ITV Studios to highlight its concerns over the episode and its ongoing use of wild animals.

RCVS Knowledge, the charity partner of the Royal College of Veterinary Surgeons (RCVS), has published a page of COVID-19 coronavirus resources for veterinary professionals across the industry.

The resource, which can be found here, includes veterinary advice, updates, research and evidence regarding the virus. The advice encompasses information to help veterinary professionals respond to questions from their clients and the BCVA's latest guidance for farm animal vets.

Veterinary professionals are urged to share the resource on social media and let RCVS Knowledge know of any additions.

Senior vice president of the BVA Dr Simon Doherty has been appointed as chair of the Food Safety & Sustainability working group of the Federation of Veterinarians in Europe (FVE).

Dr Doherty has 20 years' experience in farm animal and equine veterinary practice, industry and academia. He has been working as a senior lecturer at the Queen's University Belfast Institute for Global Food Security since 2018 and is a trustee of Send a Cow and the Animal Welfare Foundation.

The Food Safety & Sustainability working group will support FVE in all matters related to food safety, food security and sustainable livestock systems. It will also assist FVE in taking the most effective policies at EU level.