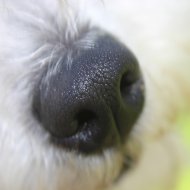 “What we have done, no one has attempted to do. We have taken the next step by asking the dog to tell us whether or not cancer exists before the medical diagnostic system does."

Finding described as a 'tremendous advance'

Scent-trained dogs can sniff-out thyroid cancer with almost 90 per cent accuracy, according to research by the University of Arkansas for Medical Sciences (UAMS).

Presenting their findings at the Endocrine Society's ENDO 2015 conference earlier this month, the researchers said that having a technique with which to detect thyroid cancer to such a high degree of certainty would be a 'tremendous advance'.

They hope that the finding will lead to cost savings in diagnoses and the prevention of unnecessary surgeries.

It is also hoped that the method could be transported to under-served areas where traditional methods of biopsy and ultrasound are unavailable.

Furthermore, the researchers believe the training could potentially be used in diagnoses of other cancers such as ovarian, breast, kidney, bladder and prostate.

Detecting a diagnosis thyroid cancer can be difficult, because it's often looking for a very small number of occurrences in a very large background of benign nodules. It is also very difficult to say that a patient is cancer free after surgery.

The study took dogs already trained for scent detection and imprinted them with fresh tissue taken from patients diagnoses with papillary thyroid cancer.

Their results were compared to a surgical pathology diagnosis and matched in 30 out of 34 cases - or 88.2 per cent accuracy.

Commenting on the study, lead author Dr Arny Ferrano said: “What we have done, no one has attempted to do. We have taken the next step by asking the dog to tell us whether or not cancer exists before the medical diagnostic system does. We wanted to see, can the doctor utilise the dog to help diagnose cancer?"

So far, the results have led the researchers believe the answer to be 'yes'.

“We’ve all looked at it from a skeptical, scientific standpoint, but the data just keeps leading us to the fact that this has remarkable clinical potential,” said Ferrano.

Up to now, the team have used what are known as 'general source' dogs, or strays that have been trained in scent detection methods. They now plan to work with researchers at Auburn University's Canine Performance Sciences programme to teach and imprint dogs that have been specifically bred for medical detection.