MRCVSonline cannot control these cookies from outside sources and we advise you to check with the relevant third party for more information..
RVN gives talk on overseas work 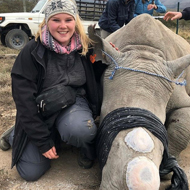 Pictured: Michaela on her internship.

Veterinary nurse Michaela Vinales gave delegates an inspiring talk on her time working as an RVN overseas on day two of the BVNA Congress (3 October) in Telford.

In a bid to encourage other veterinary nurses to take advantage of overseas opportunities, Michaela spoke about her time with Vets Go Wild in South Africa, and later, the three month internship she took there.

Initially introduced to working in South Africa through the Vets Go Wild scheme, Michaela was the only student veterinary nurse on her team, with everyone else being student veterinary surgeons, which she described as 'scary.' She commented: “This actually worked in my favour - us nurses are more practical than vets, so when I went out there, I knew a lot more than they did!”

Michaela shared anecdotes of her time doing the internship in South Africa, beginning by introducing delegates to Sausage, a sable antelope calf, who Michaela and her team hand reared.

Sausage was found alone at three weeks old, anorexic and covered in ticks – which had led her to become anaemic. Despite a long and intense recovery, Sausage pulled through, and went on to live at the reserve as a pet.

Michaela also shared anecdotes of her work both with wild animals and doing domestic clinic work, highlighting the many differences in resources between the UK and South Africa. With a particularly harrowing explanation of her work with rhinos who had been killed or injured for poaching.

Whilst doing the internship, Michaela undertook a project on ticks and tick borne diseases, and created valuable research which veterinary professionals in the area still use every day.

After leaving the internship Michaela worked alongside a veterinary surgeon she had met during her placement, who had noticed her confidence, to set up a practice, which Michaela is now head nurse and practice manager at. She explained that ultimately, her time working overseas had given her the confidence to achieve her many accomplishments.

“My time in Africa gave me the confidence to become a head nurse and practice manager at 24.”

After discussing her time in South Africa, Michaela mentioned that she would like to go overseas again and work as an RVN in other countries, and encouraged delegates to “just do it” and undertake a similar opportunity if given the chance.