Cookie use on MRCVSonline
We use cookies to ensure that we give you the best experience on our website. If you continue without changing your settings, we will assume that you are happy to receive all cookies.
Accept Policy
Change cookie settings
Horses feel as much pain as humans when whipped, studies suggest 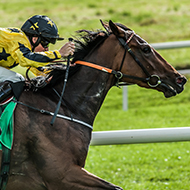 The research provides the first conclusive evidence that horses feel as much pain as humans do when whipped.

Findings support calls for a total ban on whipping in horseracing.

Two research studies conducted by the University of Sydney, Australia, have provided the first conclusive evidence that horses feel as much pain as humans do when whipped, and that the whip does not enhance race safety.

The findings, published in the journal Animals, support calls for a total ban on whipping and could have the potential to overhaul the racing industry both locally and worldwide.

Professor Paul McGreevy, who led the research, says he would not be surprised if the findings prompt the phasing-out of whipping in Australian racing within two years.

In the first study, researchers from the School of Veterinary Science took microscopic skin samples from deceased humans and euthanised horses and looked for differences between the skin structure and nerve supply. Their results yielded “no significant difference” in the concentration of nerve endings in the outer layers of the skin, nor did they show a difference in skin thickness.

Professor McGreevy commented: “This was not surprising, as horses, like humans, need robust yet sensitive skin to respond to touch, say, from flying insects or other horses. From this, we can deduce that horses are likely to feel as much pain as humans would when being whipped.”

In another study, researchers compared UK racing industry data with whips to races without them. In Britain, unlike in Australia, horse racing authorities such as The Jockey Club run whip-free races for apprentice jockeys.

Their results revealed no statistical safety difference between races with and without whips, neither did they find any differences between race times and compliance with the rules. Professor McGreevy said this “invalidates industry assumptions to the contrary” and provides evidence that the use of whips in horse racing is “unnecessary, unjustifiable and unreasonable.”

The industry claims the padded whip, mandated since 2009, prevents the horse from feeling pain. However,  evidence shows that unpadded sections of the whip, which likely cause more pain, are more likely than not to make contact with the horse.

Professor McGreevy concluded: “Repeated strikes of the whip in horses that are fatigued as they end a race are likely to be distressing and cause suffering. A horse’s loss of agency as it undergoes this kind of repeated treatment is thought to lead to learned helplessness.”