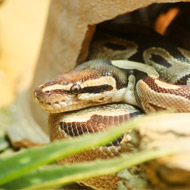 “Snakes often get a raw deal in society and are generally misunderstood, mis-sold and mistreated by the pet industry" - Elaine Todd, APA.

An ad-hoc group of veterinary surgeons and biologists are calling on the government to reinstate a rule that allows captive snakes to stretch out in their enclosures.

The call comes as new Animal Welfare licensing regulations come into force, which cover the sale of pet snakes. The legislation was put together with input from stakeholders who agreed that snakes should be kept in containers at least the length of their bodies.

But while the provision had been included in the draft guidelines for almost a year, animal welfare campaigners say Defra pulled the regulation at the last second, ‘on the basis of one protest from a veterinary clinic closely associated with the pet trade’.

In a press release, the Animal Protection Agency (APA) said the action ‘followed somewhat ‘pally’ correspondence between Defra officials and the pet business correspondent who provided minimal, unscientific and gravely flawed opinion, which Defra accepted without proper consultation or any verification.’

The ad hoc scientific group includes leading veterinary and biological experts on snake welfare, who argue that the scientific evidence contradicts the comments provided to Defra by the pet business owner.

"Despite there being no formal requirement to favour business over animal welfare in this context, Defra's so-called ‘Animal Welfare' division seems to be trying to swindle snakes out of the space they need - just to keep the pet industry happy,” said Elaine Todd, biologist and director of the APA.

“Snakes often get a raw deal in society and are generally misunderstood, mis-sold and mistreated by the pet industry. For example, snakes are commonly kept (stored) by breeders and hobbyists in minimalistic ‘racks' (plastic drawers) with keepers stating that if they eat and breed well they must be "thriving".

“Their ‘need to be able to exhibit normal behaviour patterns' as stipulated in the Animal Welfare Act 2006 and the many recognised physical and stress-related diseases associated with keeping snakes in such enclosures are conveniently side-stepped for the sake of convenient stocking.”

She continued: “No one would accept cats or dogs being confined in enclosures just large enough to stretch out in - and yet the UK government is trying to deny snakes even this basic need. As the newly formed ad hoc scientific group states, it is "scientifically and morally unacceptable that snakes should remain the only animal group prevented by flawed evidence and policy from fully stretching their bodies in captivity".

Responding to the APA’s comments, a Defra spokesperson said the current standards on snake welfare remain in effect to protect the animals involved. It added that there is also still a provision in place that means if an animal for sale is kept for a period of more than three months, it must be moved to an enclosure size which fits bets practice for keeping that animal

“We are proud to have some of the highest animal welfare standards in the world, including for snakes and other reptiles,” said Defra, “While the issue of snake enclosure was raised during our extensive consultation with stakeholders, there is insufficient evidence to support introducing further rules.”