MRCVSonline cannot control these cookies from outside sources and we advise you to check with the relevant third party for more information..
'Phoenix' rises after surgery to repair a ruptured tendon 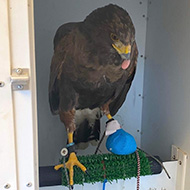 Phoenix was bitten by a squirrel and one of her toes got infected.

The harris hawk was left in a flap after being bitten by a squirrel.

A vet from Kent has saved the leg of a harris hawk after carrying out rare surgery to repair a ruptured tendon in its foot.

Specialist Daniel Calvo Carrasco from Sandyhole Vets carried out the complex operation on the bird, named Phoenix, which was left in a flap after being bitten by a squirrel.

Daniel was assisted by veterinary nurse Debbie Anderson who, in a strange coincidence, recently ruptured her own tendon and was in theatre wearing a protective boot.

The surgery was a success, and Phoenix is now undergoing post-operative care including physiotherapy, so that she can fly once again.

Daniel, an RCVS Specialist in Zoo and Wildlife Medicine and European Veterinary Specialist in Avian Medicine and Surgery, said: “Birds have very little soft tissue covering their wings and legs, so damage to different tendons is not uncommon.

“Phoenix was a more unusual case as she was bitten by a squirrel and one of her toes got infected, with the infection eventually causing more widespread damage and rupturing the tendon.

“Normally, a ruptured tendon in the foot of a Harris hawk would result in an amputation rather than tendon repair, as it is a very complex injury.”

He added that suturing a tendon is tricky as they are so small - and once the case is chronic, the ends of the tendon tend to get attached to the surrounding structures.

“We decided to try to save the foot in this case, though, and used a Three-Loop Pulley Suture, a technique which is commonly used in larger animals such as dogs and cats," he continued. "It worked well and surgery was successfully completed with Phoenix making a positive recovery.”

Veterinary nurse Debbie said: “I had a very similar surgery in January, with a synthetic ligament used to repair my tendon and it certainly helped me have even more empathy to her healing progress!

"Phoenix recovered very rapidly. I held her in cast until she regained consciousness and then placed her into her travel box. Within five minutes she was weight bearing on her protective ball bandage and able to turn about on her perch.”