MRCVSonline cannot control these cookies from outside sources and we advise you to check with the relevant third party for more information..
Nature reserve welcomes konik pony foals 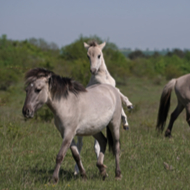 Konik ponies are an ideal breed for the purpose, suited to the rigours of life on the fen.

Wicken Fen is maintained by the pony herd.

Originating from Poland, konik ponies have been bred at Wicken Fen nature reserve in Cambridgeshire since 2003 and their grazing is assisting in the creation of habitats for other species at the fen.

A spokesperson for the National Trust told BBC News that the reserve could not be managed with machinery, so the ponies were brought in to assist: “The animals help keep the landscape open and help wetland and grassland plants to become established.”

Konik ponies are a hardy breed of ponies, and will eat a wide range of vegetation, as well as adapting easily to wetland areas with self-trimming hooves, and an independent nature.

Over 200 konik ponies have been born at Wicken Fen since breeding began there almost 20 years ago.

Leaving water-filled hoof prints and dung piles, the ponies attract new species of flora and fauna to the lowland landscape.

Alongside the 12 new equine arrivals, four baby highland cows have been born on the reserve, with the most recent birth being the 100th calf born at the site. These adorable arrivals will be helping to manage the land with the konik ponies, grazing to manage vegetation.