MRCVSonline cannot control these cookies from outside sources and we advise you to check with the relevant third party for more information..
Wide tunnels and scent trails 'highly beneficial' to ferret welfare 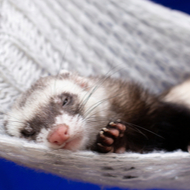 The most commonly provided forms of environmental enrichment revealed by the survey were those that promote rest, such as hammocks.

Environmental enrichment such as wide tunnels, digging, and human interaction are highly beneficial to ferrets and can directly impact their health and wellbeing, according to new research.

A team of researchers from the Royal Veterinary College (RVC) also found that ferrets enjoy scent trails, and that these could be introduced to more ferret housing - with prey animal scents, herbs and spices among some of their preferred smells.

Conversely, the study found that rubber toys, narrow tunnels and certain fabrics, such as fleece and towels, were ineffective, leading to stress, injury and aggressive behaviours.

Researchers hope their findings, published in the journal Animals, will help owners and those working with ferrets to further improve their welfare.

An estimated one million pet ferrets live in the UK, and 500,000 are understood to reside in the United States. However, researchers understand very little about how ferrets are housed, and what environmental enrichment may benefit them.

To find out more, the team developed an online questionnaire and shared it with ferret owners, zoos, laboratories, rescue centres and the pest control sector. Of the 750 responses, just 15 per cent reported to provide scent trails, suggesting that this form of enrichment could be introduced to more ferret housing.

The survey also revealed that housing varied across sectors from single-level cages to free-range housing in a room or outdoor enclosure. However, multi-level cages and hutches are understood to promote better welfare compared to single-level housing.

The most commonly provided forms of environmental enrichment revealed by the survey were those that promote rest - such as hammocks - as well as tunnels, boxes and human interaction.

Commenting on the findings, Dr Charlotte Burn, associate professor in animal welfare and behaviour science at the RVC, said: “It’s really important that ferret keepers avoid hazardous rubber toys, narrow tunnels and claw-catching fabrics because many of our respondents said these could injure their ferrets, sometimes requiring surgery or other veterinary assistance.

“The ferret keepers in our survey had some great tips about what ferrets seemed to most enjoy. Some are already commonly provided, such as wide tunnels, digging, and supervised exploration, but we’d like to encourage owners to try some of the rarer ones too.

"These included paper bags for ferrets to rustle about inside, supervised water play, and scent trails with a healthy treat at the end. Scents to try include prey animal scents from fur, feathers or used rodent bedding, or certain herbs and spices – but ferrets seem to dislike the smell of peppermint!”

Lead author Alice Dancer, a PhD Student at the RVC, added: “How animals are housed and the environmental enrichment they are given can have a significant impact on their health and wellbeing. The finding that large housing and high numbers of enrichment are possible in all ferret-keeping sectors is a really good sign for ferret welfare.

"We hope that these results help inspire ferret caretakers to consider the housing they use, offer ideas for new ferret enrichments, and raise awareness of enrichments which may harm their ferrets.”