MRCVSonline cannot control these cookies from outside sources and we advise you to check with the relevant third party for more information..
UK veterinary antibiotic sales halved since 2014 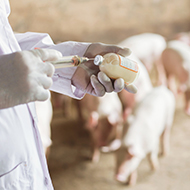 Sales of the Highest Priority Critically Important Antibiotics in animals have fallen by 79 per cent since 2014.

The VMD’s latest findings show sales have dropped 52 per cent in six years.

Sales of veterinary antibiotics in the UK have more than halved over the past six years, according to a report published by the Veterinary Medicines Directorate (VMD).

HP-CIAs, which are crucial for human medicine, only accounted for 0.5 per cent of the total antibiotic sales in 2020. The report also reveals reductions in the pig, chicken, turkey and gamebird sectors since 2019.

According to the VMD, the UK has achieved some of the lowest levels, and biggest reductions, in resistance in livestock across Europe. E. coli carrying resistance genes to HP-CIAs continue to decrease, it said.

“Working closely with the farming industry and the veterinary profession, we have achieved huge reductions in the use of antibiotics since 2014, and we are seeing reductions in resistance as well,” commented Abigail Seager, chief executive of the VMD. “These successes are testament to the cooperation between farmers and vets in promoting the responsible use of antibiotics.”

Christine Middlemiss, the UK’s Chief Veterinary Officer, added: “This year’s VARSS report shows how the UK continues to make important reductions in antibiotic use in livestock across the board.

“It is encouraging to see farmers and vets continuing to work together to tackle antibiotic resistance through the responsible use of antibiotics, which in turn protects human health as well as reducing the burden of disease in animals. We are committed to protecting animal health, and we will continue to work closely with industry and the veterinary profession on this important issue.”