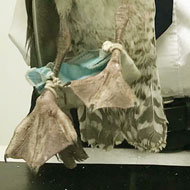 RSPCA officers were called out to a gull with a face mask wrapped tightly around its legs.

New figures reveal impact of litter on wildlife since start of lockdown.

The RSPCA has issued a plea to the public to 'snip the straps' off disposable face masks after a gull was found with a mask wrapped tightly around its legs.

The charity reports that the bird has made a full recovery, despite the mask causing swelling to his legs, and hopes that the new 'snip the straps' message will prevent similar incidents from occurring.

RSPCA chief executive Chris Sherwood said: “For many years the public have been aware of the message to cut up plastic six-pack rings before throwing them away to stop animals getting tangled in them, and now we are keen to get out the message that the same should be done for face masks too - as very sadly, animals are susceptible to getting tangled up in them.”

The call comes as new figures show the impact litter has had on animals since the start of lockdown. Since 23 March, RSPCA Cymru reports that it handled 35 separate incidents across the country concerning animals caught in rubbish.

Among the incidents include a swan found with his head stuck in a discarded foam play square, and another swan rescued after getting a barbed fishing hook stuck in his neck. The RSPCA says that the majority of these events are entirely preventable if rubbish is disposed of correctly.

Mr Sherwood added: “Our RSPCA officers have had to rescue animals from getting tangled in face masks and we expect incidents may go up as time goes on, so the best thing to do is to simply cut the elastic ear straps in half before throwing it away.”