Cookie use on MRCVSonline
We use cookies to ensure that we give you the best experience on our website. If you continue without changing your settings, we will assume that you are happy to receive all cookies.
Accept Policy
Change cookie settings
Research into cow DNA could help extend human life expectancy 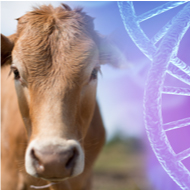 The study also revealed that factors such as stress and illness can affect telomeres.

Scientists from Scotland’s Rural College (SRUC) have announced that research into the DNA of cows could go on to help human geneticists in assessing how we can lead healthier, longer lives.

In a study of the lives of 700 cows, more than 2,000 blood samples were taken. SRUC scientists discovered that the weeks and months after birth are when telomeres – which protect the end of chromosomes – deteriorate the most, indicating how long and healthy an animal could live.

Telomeres reduce every time a cell divides because the mechanism that repairs the DNA strands is not 100 per cent effective. The study also revealed that factors such as stress and illness can affect telomeres, and although they cannot be genetically altered in humans, studies into their deterioration is helping scientists prolong life.

Professor Mike Coffey, head of animal and vet science at SRUC said: “The data we have collected is the biggest in the world on repeat measure of telomere length on the same animal over time so it is very valuable.

“We found that most of the loss of telomere length takes place early in the animal’s life. Cells divide rapidly early in life so the argument is that animals who are born with longer telomeres have a greater chance of survival before the shorter telomeres limit their lives.”

This ‘easy-to-obtain biological marker’ can be used moving forward, for selection in animals, helping farmers to assess the lifespans of cattle and determine which cows would be better for breeding, dairy or fattening up for beef.

Professor Melissa Bateson, from Newcastle University’s Neuroscience Institute, outlined the importance of animal research as, unlike human research, it can include experiments into telomeres.

She added: “If you show that stress is causal in shortening telomeres in animals, it gives more credence to the idea that something similar may be going on in humans.

“If we think that telomeres are a measure of biological age and basically sum up all the bad things that you have been exposed to over your life then that is potentially quite useful [because] it can contribute to our understanding of what kind of lifestyle factors are going to make you live a long, healthy life and which ones might be going to make you die young.”