Cookie use on MRCVSonline
We use cookies to ensure that we give you the best experience on our website. If you continue without changing your settings, we will assume that you are happy to receive all cookies.
Accept Policy
Change cookie settings
BVA and NOAH respond to introduction of Agriculture Bill 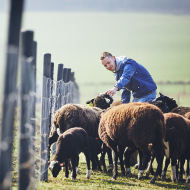 "We are pleased to see that animal health and welfare gets the prominence it deserves in this long-awaited bill." - Daniella Dos Santos, BVA.

Farmers to be rewarded for upholding animal welfare

Both the BVA and NOAH have welcomed the introduction of the new Agriculture Bill and its recognition of the importance of improving animal health and welfare.

The Bill states that in the future farmers and land managers in England will be rewarded with public money for “public goods”, these include measures to protect wildlife and biodiversity, improved access to the countryside and higher animal welfare standards.

President of the BVA Daniella Dos Santos said: “We are pleased to see that animal health and welfare gets the prominence it deserves in this long-awaited Bill.

"We are rightly recognised as a world leader for our animal welfare standards, so measures that incentivise industry to both maintain and enhance those standards are very positive and put the country on a firm footing as we build future trade links.”

The BVA also expressed the importance of using the veterinary profession’s expertise in the delivery of the Bill. Adding that: “Vets play a crucial role in monitoring and enhancing animal health and welfare and food safety in UK agriculture, from the farm-gate through to trade certification and border checks.”

Dawn Howard, chief executive of NOAH, said: “High standards of animal health are integral to improving animal welfare, and it is right that they are recognised within the Agriculture Bill as a public good.

"Not only will improving animal health help deliver benefits in terms of welfare, it will also support raising productivity, improved sustainability and resilience of farms – all helping to prepare for changes in trading outside the EU and strengthening our food security.”

NOAH has also stated that it will analyse the Bill when it is released in full and looks forward to working with the UK government to ensure that animal health is upheld as a priority.