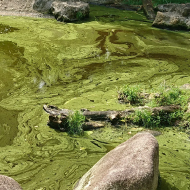 Blue green algae blooms appear as green or greenish-brown scum on the surface of water.

A rise in reports of toxic blue green algae in several locations across the UK has prompted the BVA to issue a warning to pet owners.

So far this summer, blue green algae has been confirmed in water bodies in Southampton and Fleet in Hampshire, Edinburgh and Elgin in Scotland, Cornwall, Leicestershire, Derbyshire and Lincolnshire, among other locations.

BVA’s junior vice president Daniella Dos Santos said: “We know that some dogs enjoy nothing better than a paddle in a cool lake while on a walk during summer months, but my advice to pet owners would be to keep your dog on a lead during walks near water confirmed to have toxic algal blooms.

"While not all blue green algae are poisonous, it is impossible to tell the difference visually, so it is better to be safe than sorry.

“There is currently no known antidote for the toxins, so prompt veterinary treatment is essential to tackle their effects and ensure a good chance of recovery. If you suspect your dog has been exposed to blue green algae, rush it to your local vet without delay."

Blue green algae blooms appear as green or greenish-brown scum on the surface of water and can contain toxins that are harmful to animals, even in small quantities. Dogs swallow the algae by drinking the water or licking their fur after a swim.

Symptoms appear within a few minutes or hours of exposure and can include vomiting, diarrhoea, drooling, disorientation, difficulty breathing, seizures and blood in the faeces. Left untreated it can cause liver damage and rapid death.