MRCVSonline cannot control these cookies from outside sources and we advise you to check with the relevant third party for more information..
Pet trackers gather more data about owners than pets - study 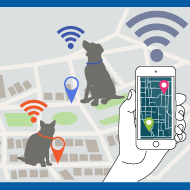 Researchers analysed the data captured by 19 wearable devices that are currently available to consumers.

Devices may lead owners into a false sense of security

Pet wearable devices gather more data about owners rather than pets, according to new research.

A study by the Bristol Cyber Security Group found that wearables do not always acknowledge the privacy implications for humans and their data and that they could be used to build personal profiles on pet owners.

The research was carried out by researchers at the Universities of Bristol and Haifa, Israel, and peer-reviewed in the journal IEEE Security & Privacy.

“The consumer’s desire to provide the best care for their pets combined with the marketing of the device may lull them into a false sense of security,” said lead researcher Dr Dirk van der Linden. “It is the owner who is the actual user of the product, and the data collected from the pet wearable has privacy implications for the humans.”

He continued: “Access to pet activity data could be used to build profiles on pet owners, with implications ranging from burglars knowing when to approach a home, to insurance companies inferring health profiles of pet owners via their dog’s activity.”

In the study, researchers analysed the data captured by 19 wearable devices that are currently available to consumers. They found that data gathered on the pet owner is four times higher than that of their pet. There also appeared to be a lack of clarity on the type of data that is stored.

The researchers also found that just six out of the 19 devices are compliant with the General Data Protection Regulation (GDPR).

Furthermore, there was a clear discrepancy between the marketing of the devices and the data captured. Seven of the 19 devices tested had a location tracking function but did not detail any location in their privacy policy.

The paper calls for clearer marketing of the devices and explicitly marking pet activity data as personal data to ensure more transparency for users.