Cookie use on MRCVSonline
We use cookies to ensure that we give you the best experience on our website. If you continue without changing your settings, we will assume that you are happy to receive all cookies.
Accept Policy
Change cookie settings
Rising ivory prices could lead to more elephant poaching - study 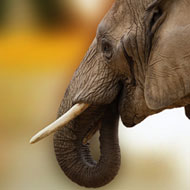 The global price of ivory has increased tenfold since the 1989 CITES trade ban, according to new research, putting the lives of tens of thousands of elephants at risk.

Published in Biological Conservation, the study is the first to analyse trends in global ivory market values since the ban came into effect.

Researchers fear that rising ivory prices could increase poaching incentives, and therefore lead to a higher number of elephants being killed. The research was carried out by a team at the University of Bristol’s Veterinary School.

"With poachers killing an estimated 100 elephants of the remaining 350,000 each day, we believe our findings are significant to global wildlife conservation policy-making,” explained lead author Monique Sosnowski.

"Until now, very little has been known about global ivory prices since the international ban in 1989. We hope that a greater understanding of the factors that drive the price of ivory will lead to better informed policy interventions that lead to a more secure future for the long-term survival of elephants and other animals that suffer due to the ivory trade."

In the study, researchers analysed a large dataset of ivory prices collected between 1989 and 2017 from literature and trips to ivory markets. Together with information on the ivory product type, weight, region and legality, researchers were able to identify the factors that push up ivory prices.

They found that between 1989 and 2014, the global price of ivory increased tenfold and has been gradually decreasing since.

The variables that influenced activity were where in the world the ivory was sold, whether the ivory had been carved, whether the sale was legal, and the total of ivory estimated to have been traded that year.

Researchers hope that a greater understanding of price trends and associated demand, together with knowing what factors influence price, will help policymakers, law enforcement and conservationists better understand where to focus their efforts.