Cookie use on MRCVSonline
We use cookies to ensure that we give you the best experience on our website. If you continue without changing your settings, we will assume that you are happy to receive all cookies.
Accept Policy
Change cookie settings
Parasitic fish could lead to more effective treatments for brain disease 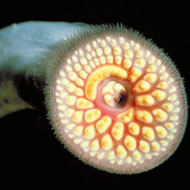 Molecules from sea lampreys could be combined with other therapies to deliver drugs directly to the human brain.

Researchers assess the effectiveness of sea lamprey molecules on glioblastoma

A parasitic fish renowned for its distinctive, disc-shaped mouth could pave the way to more effective treatments for brain conditions, including cancer and stroke.

Native to the Northern Hemisphere, the sea lamprey is an ancient species of fish that closely resembles an eel. Its mouth is filled with sharp, hook-shaped teeth, that it uses to feed off other fish.

Now, new research suggests that molecules from sea lampreys could be combined with other therapies to deliver drugs directly to the human brain.

The study, led by the universities of Wisconsin-Madison and Texas, looked at a set of molecules from the lamprey’s immune system called VLRs (variable lymphocyte receptors). While most medicines target specific features on or inside an individual’s cells, VLRs are different because they target the extracellular matrix (ECM) - a mesh of proteins and sugars that both surround and support brain cells.

Researchers believe these molecules could be adapted and combined with an array of other therapies, giving hope to people with brain tumours, multiple sclerosis, Alzheimer’s disease or even traumatic head injuries.

“This set of targeting molecules appears somewhat agnostic to the disease,” says Eric Shusta, a professor of chemical and biological engineering at UW–Madison. “We believe it could be applied as a platform technology across multiple conditions.”

The technology takes advantage that many diseases disrupt the blood-brain barrier. This is what lines the blood vessels of the central nervous system and protects the brain from toxins and pathogens. In some illnesses, this blood-brain barrier leaks around the disease area, offering a unique entry point for any treatment.

In the study, researchers assessed the effectiveness of VLRs in mouse models of glioblastoma, an incurable brain cancer. The team bound the VLRs to an approved chemotherapy drug called doxorubicin and found that the treatment prolonged the rodents’ survival.

The team note that it’s possible that drugs delivered to the matrix could accumulate to a much higher therapeutic dose than medicines aimed at the inside of cells.

Collaborator John Kuo, a neurosurgeon-scientist and professor of neurosurgery at the University of Texas at Austin, said: “Similar to water soaking into a sponge, the lamprey molecules will potentially accumulate much more of the drug in the abundant matrix around cells compared to specific delivery to cells.”

The team are now planning to link the VLR molecules to additional anti-cancer drugs, such as immunotherapy agents that activate a patient’s own immune system to destroy tumours. They also see promise in using the molecules as diagnostic tools to detect blood-brain barrier disruption.

“I’m excited about trying this strategy in different disease model systems,” says Kuo. “There are several disease processes that disrupt the blood-brain barrier and we could conceive of delivering a variety of different therapies with these molecules.”

The study, Identification of variable lymphocyte receptors that can target therapeutics to pathologically exposed brain extracellular matrix, is published in the journal Science Advances.