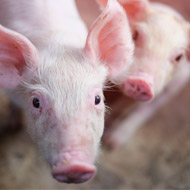 Pigs are the natural host for Aujeszky’s disease.

A disease that is fatal in piglets less than seven days old has been confirmed in southern France, with wild boar believed to be the source of the outbreak.

Reporting on its website, the National Pig Association (NPA) said two outbreaks of Aujeszky’s disease have been identified in domestic pigs in Saint Martin les Eaux and Monteux.

The disease, also known as pseudorabies, was confirmed in five animals, and more than 800 pigs are considered to be ‘susceptible’ across the two units.

An update from the World Organisation for Animal Health (OIE) notes that the ‘source of the first outbreak seems to be in contact with wild boars'. It adds that ‘the second farm is epidemiologically linked to the first outbreak’ through the purchase of fattening pork.

To control the spread of the disease, various control measures have been applied, including movement controls, increased surveillance and tracking of animals that may be affected. The NPA adds that the slaughter of potentially infected animals and zoning are ‘to be applied’.

Pigs are the natural host for Aujeszky’s disease, although it can also affect pigs, sheep, cattle, dogs, cats and rats. The virus is fatal in piglets under seven days old, but mortality rates decline as pigs get older.

Until the 1960s, Aujeszky’s disease had not existed widely outside Eastern Europe, but by 1989 had been confirmed in 43 countries.