MRCVSonline cannot control these cookies from outside sources and we advise you to check with the relevant third party for more information..
Vets save lions from illegal zoo in Bulgaria 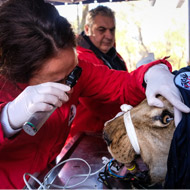