MRCVSonline cannot control these cookies from outside sources and we advise you to check with the relevant third party for more information..
Study reveals how cows indicate feelings using their ears 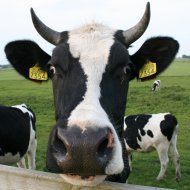 "Understanding animal emotions is crucial if we are to improve animal welfare as emotions play a major role in an animal’s mental well-being."

New research into how to measure the emotional state of cows has suggested that it may be possible to tell how a cow is feeling from the position of its ears. It also reveals that, like our pets, cows display visible signs of pleasure at being stroked.

The study showed that when cows were stroked for five minutes, an experience that put the cows into a calm and relaxed state, the cows performed either a backward ear posture or a hanging ear posture, where the ear fell loosely, perpendicular to the head. This contrasts with the more usual position of the ear before and after stroking of either upright or forwards.

Previous studies have suggested that ear position may provide clues to how sheep and pigs are feeling, however this is the first study to look at whether cows display similar traits.

Helen Proctor from World Animal Protection said: “Although these results need further validation using different stimuli, they do indicate that the use of ear postures may provide a quick, non-invasive and low-cost measure to assess the emotional state of dairy cows.

“Because emotions are defined as short lasting, it is possible that ear postures may provide both an immediate indicator of the cow’s emotional state and may also be indicative of a longer lasting mood state.

It is hoped that the study will be of use to the dairy industry in their programmes and understanding of their cows.