MRCVSonline cannot control these cookies from outside sources and we advise you to check with the relevant third party for more information..
British oyster restoration project thriving 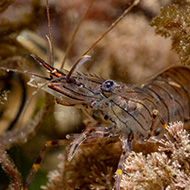 The Wild Oysters Project has announced that it has found over 27,000 marine animals living among its native oyster nurseries.

This means that alongside restoring and helping oysters, the project is supporting a wide variety of marine life in coastal regions across the UK.

Aiming to restore coastal waters around the UK, the project is bringing back native oysters after their population declined by a whopping 95 per cent.

Blue Marine Foundation, the Zoological Society of London (ZSL) and British Marine are collaborating on The Wild Oysters Project, and have set up over 140 oyster nurseries and 4,000 oysters in River Conwy (Wales), Firth of Clyde (Scotland) and Tyne and Wear (England).

One year on from the implementation of the project, 65 species have been discovered living alongside the oysters. These include the Critically Endangered European eel, the common prawn and shore crab.

Restoration project manager Matt Uttley, from Blue Marine, explained: “It is fantastic that we are now observing an increase in biodiversity around the nurseries. Native oysters are ecosystem engineers, meaning they create a complex 3D habitat that provides feeding and nursery grounds for other species.

“Where we find wild populations of native oysters, we also find an increased number of other species.

“Given that native oyster beds are so crucial to marine life, yet are one of the most threatened marine habitats in Europe, the work of the Wild Oysters project to restore these lost habitats is essential.”

Mature oysters in the nurseries have now begun to release the next generation of oysters to the seabed. These youngsters will settle across the three oyster reefs and continue the work of restoring the biodiversity of the coastline of Britain.

Celine Gamble, wild oysters project manager ZSL, commented on its success: “In a bid to restore native oyster populations, and in turn work towards the return of healthy, resilient coastal waters, we placed nurseries filled with oysters underneath marina pontoons.

“So far, with the support of over 200 local community volunteers, who dedicated have over 2,000 hours, we have already seen oysters have a hugely positive impact, in what is a really short amount of time.

“We have been delighted to find all of these living alongside the native oyster nurseries we established, within just a year of us starting the project.

“We can estimate, in just one year, the 4,000 oysters have now filtered out pollutants in almost 98 million litres of water, the equivalent of almost half a million bathtubs of water. They are the superheroes of our oceans.”