MRCVSonline cannot control these cookies from outside sources and we advise you to check with the relevant third party for more information..
Raw meat diet linked with increased antibiotic-resistant bacteria 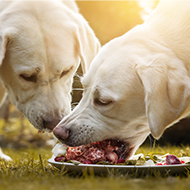 'We should do everything we can to reduce the circulation of critically important antibiotic-resistance E. coli' - Professor Matthew Avison.

New research has discovered an association between the feeding of raw meat to pet dogs and antibiotic-resistant bacteria, suggesting that raw feeding may not be the safest dietary choice.

Led by a team at the University of Bristol, two studies found that dogs on a raw meat diet were more likely to have Escherichia coli (E. coli), the antibiotic-resistant bacteria, in their faeces.

Between them, the two studies analysed faecal samples from over 800 dogs to explore the associations between the presence of E. coli and dogs' lifestyles, diets and environment.

Professor of Molecular Bacteriology, Matthew Avison, who led the microbiology aspects of both studies, explained: "Antibiotic-resistant bacteria are everywhere, but some antibiotics are considered critically important for use in humans.

“We have shown that dogs fed raw meat are more likely to carry bacteria resistant to these important medicines. This doesn’t mean that the animal, or the owner, will become sick.

“E. coli is a widespread bacterium that is found in the intestines of all humans and animals, however it is a common cause of many diseases including urinary tract infection and can cause serious illness including sepsis if it spreads to other parts of the body.”

The zoonotic threat regarding E. coli, with its ability to be shared between dogs and humans, suggests that feeding dogs a raw diet may increase the circulation of the bacteria, the researchers have said.

Professor Avison continued: “We should do everything we can to reduce the circulation of critically important antibiotic-resistant E. coli and other bacteria. Our research adds to the increasing evidence that not feeding raw meat to dogs may help in that objective.”

Published in One Health, the first study found evidence that raw feeding was associated with E. coli in 16-week-old dogs.

The second study, 'Molecular ecology and risk factors for third-generation cephalosporin-resistant Escherichia coli carriage by dogs living in urban and nearby rural settings', explored this association further, providing suggested interventions for reduce the zoonotic threat. This study is open access and has been published in the Journal of Animal Chemotherapy.

Professor Kristen Reyher, co-author on both papers, added: “We know humans and animals share bacteria with one another, so what we find in your pet may well also be in you.

“Pet owners should be encouraged to practice good hygiene and not feeding raw food to your dog can be part of this.

“We can all do our part to decrease antibiotic resistance and its terrible effects on both human and animal health.”