MRCVSonline cannot control these cookies from outside sources and we advise you to check with the relevant third party for more information..
Giant rabbits 'bred to be eaten' rescued from allotment 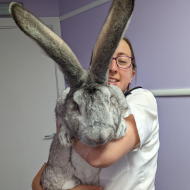 The biggest rabbit weighed in excess of 8kg.

The rabbits are now in the care of the RSPCA.

Dozens of giant rabbits have been rescued from 'cramped and dirty' conditions at an allotment in Northumberland.

Animal charity RSPCA rescued a total of 47 Flemish giant rabbits from the hutches, where inspectors believe they had been left to breed with each other.

The biggest rabbit weighed in excess of 8kg – the equivalent of a Jack Russell or King Charles Spaniel – and had ears measuring a whopping seven inches long.

While often kept as pets, Flemish giant rabbits are still bred for their fur and meat, and the RSPCA believes these rabbits were being bred to be eaten.

The rabbits are now in the care of the RSPCA, and the hope is that they will eventually all find loving homes.

RSPCA inspector Trevor Walker, who helped to rescue the rabbits, said: “These poor rabbits were living in cramped and dirty conditions which would have been very unpleasant for them especially in the heat.

“Luckily a vet found they are all in good condition, one is on medication for weepy eyes and a wound on the back of his neck, but we hope they will find loving homes. They will make good companion animals as they have a nice temperament.”

He added that rabbits are becoming an increasing problem across the RSPCA, as the charity is seeing more and more coming into its care - many as a result of the cost of living crisis.

Inspector Walker continued: “We would really urge people to do their research before taking on a pet and also to make sure you get your pet neutered at an early opportunity to prevent unwanted litters of animals - all of these rabbits will be neutered, microchipped and vaccinated before finding new homes.