MRCVSonline cannot control these cookies from outside sources and we advise you to check with the relevant third party for more information..
World's oldest male captive giant panda dies 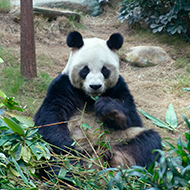 An Ocean Park conversion suggests that one year of age for pandas is roughly equivalent to three human years.

Ocean Park's famous resident An An was 35 years old.

The world's oldest male giant panda in captivity has died aged 35, as reported by BBC News.

An An, who lived at Ocean Park in Hong Kong, was euthanised after showing steady signs of deterioration over the last few weeks.

Ocean Park, a hybrid amusement park and zoo, has been where An An lived since 1999, after he was gifted to Hong Kong from China's central government.

An An's age, equivalent to 105-years-old in human years, made him the world's oldest male giant panda in captivity.

In a Facebook announcement, Ocean Park said that it was 'deeply saddened' by the loss of An An, and encouraged visitors to sign the condolence books in the park if they wished to pay tribute to the beloved panda.

Those in charge of the elderly panda's care noticed that his food intake had declined significantly and progressively, and shortly after that, An An refused solid food entirely.

Alongside this, his activity levels had declined, and caretakers noticed that he was resting for an increasingly longer amount of time.

Paolo Pong, chairman of Ocean Park Corporation, told BBC News: "An An has brought us fond memories with numerous heart-warming moments. His cleverness and playfulness will be dearly missed.”