MRCVSonline cannot control these cookies from outside sources and we advise you to check with the relevant third party for more information..
ZSL partners with living biobank to save endangered wildlife 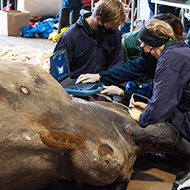 The bank stores the living genetics of some of the planet's most threatened species.

ZSL London Zoo has announced a partnership with Nature's Safe, one of Europe's first Living Biobanks, to preserve the live genetics of some of the planet's most endangered species.

Through the partnership, ZSL will provide samples from post-mortems carried out at ZSL's London and Whipsnade conservation zoos.

From southern white rhinos to critically-endangered mountain chicken frogs, the samples will be sent to Nature's SAFE dedicated laboratory in Shropshire, where they will be processed and stored in a living state at -196°C.

Once thawed, the cells could one day be used in cell culture or assisted reproductive technologies to continue the existence of threatened species and maintain genetic diversity within the gene pool.

ZSL senior vet, Dr Taina Strike, commented: “With so many animals at risk of extinction, outside-of-the-box thinking and collaboration is vital for the preservation of threatened species. For almost 200 years, international conservation charity ZSL has been at the forefront of wildlife science and conservation and we'll continue to explore all avenues to keep one step ahead of the threats facing animals across the world.”

Professor Suzannah Williams, chief scientist at Nature’s SAFE and founder of the Rhino Fertility Project at Oxford University, said: “Nature’s SAFE is acting now to preserve species before they are lost using both established methodologies and exploring the most promising innovations in assisted reproductive technologies; our partnerships are critical to achieving impact now and, in the future.

"It’s thanks to passionate organisations such as ZSL, that we can continue to develop innovative strategies to protect the incredible species on our planet.”