MRCVSonline cannot control these cookies from outside sources and we advise you to check with the relevant third party for more information..
First bison released in UK for 6,000 years 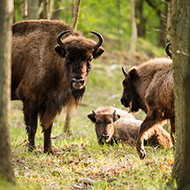 Bison have been released into the wild in Kent today, marking the first time bison have roamed the UK for 6,000 years.

Named 'Wilder Blean', the project to return bison to the UK's ecosystem aims to manage and restore the habitat, reducing flood risk and slowing the climate crisis.

The bison were released into West Blean and Thorndon Woods near Canterbury, and will create a more resilient landscape in the woods. They will do this by creating layers in the forest and naturally felling trees, which will diversity the woodland.

Chief executive officer at Kent Wildlife Trust – who is running the project alongside Wildwood Trust – Evan Bowen-Jones, said: “The bison will help to create climate resistant landscapes which can adapt to the challenges presented by the crisis we face.

“We want Wilder Blean to mark the beginning of a new era for conservation in the UK. We need to revolutionise the way we restore natural landscapes, relying less on human intervention and more on natural engineers like bison, boar and beaver.”

Soon, the Wilder Blean project will release Exmoor ponies, Iron Age pigs and longhorn cattle in the ancient woodland to join the bison – all of the species' natural behaviours will manage the landscape.

Paul Whitfield, director general of Wildwood Trust, commented on the exciting release: “Today heralds a new dawn for conservation and the fight against climate change.

"With this project, we’re going to prove the impact bison in the wild can have on the environment. They will create an explosion of biodiversity and build habitat resilience; locking in carbon to help reduce global temperature rise.

“This will act as a huge catalyst for change, with the project being replicated on scale across the country.. It will make a phenomenal difference. Its great news in these worrying times.

“Not only this but we're giving people in the UK - for the first time in over a thousand years - the chance to experience bison in the wild. It's a really powerful emotional, visceral experience and it’s something we’ve lost in this country. It's an absolute privilege to be part of the team that's bringing that back.”