MRCVSonline cannot control these cookies from outside sources and we advise you to check with the relevant third party for more information..
Animal welfare charities react to horse whip review 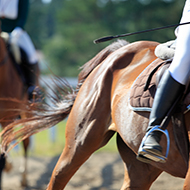 “It’s difficult not to conclude that these rule changes are about ‘optics’ not welfare" - Emma Slawinski, RSPCA.

The BHA has concluded that whipping horses for 'encouragement' should continue.

Animal welfare charities have responded to a recommendation by the British Horseracing Authority (BHA) to allow jockeys to continue whipping horses in racing for “encouragement”.

Under the proposals, agreed by the majority of the Steering Group, jockeys will be able to use the whip for 'encouragement', in an attempt to make the horse run faster, but restrict its use 'to the backhand position only'.

In a statement, the RSPCA condemned the recommendation as a 'missed opportunity for horse welfare', adding there will 'complete disbelief' among animal lovers regarding the decision.

Emma Slawinski, RSPCA director of policy, prevention and campaigns, said: “The BHA has missed the chance to improve the welfare of horses in sport - and get rid of the whip for encouragement - something that is long overdue and being demanded by the public.

“By just tinkering with the rules and allowing the whip to still be used for encouragement, the wellbeing of the horse is depressingly absent from these changes."

She added: “It’s difficult not to conclude that these rule changes are about ‘optics’ not welfare. There’s no evidence that switching to ‘backhand only’ whip strikes will reduce pain for horses - it’s just an attempt to try to make the sport look better.”

Her words were echoed by World Horse Welfare’s chief executive Roly Owers, who was a member of the Whip Consultation Steering Group and the only member representing the equine welfare sector.

In a statement released by the charity, Mr Owers said much good had come out of the work - such as stricter penalties for rule breaching and a greater focus on education. However, he warned that the recommendation on whip use to be switched to backhand only is 'unjustified' and 'does not go far enough'.

“We are clear that we want to see a move away from the use of the whip for ‘encouragement’ in horseracing on both welfare and ethical grounds,” he said. “We simply do not believe its use is justified, especially in light of what we now know about what makes a good horse-human partnership.”

He continued: "We will continue to work constructively with the BHA and others in racing to support the implementation of the rules and the recommendations of the Horse Welfare Board. Racing of horses, like all horse sport, can only continue to take place if the sport maintains the support of the public, which will require everyone in racing to justify their use of the whip in the context of horse welfare, and show that they can be trusted to adhere to and enforce these rules.”

David Jones, chair of the Whip Consultation Steering Group, said: “It is our view that, as a result of this process, we are continuing to evolve standards of whip use, through a regulatory approach that will be demonstrably and visibly fair in terms of what they ask of our horses and the spirit of fair sporting competition.

“It is inevitable that there will be those who think we have gone too far, and those who think we have not gone far enough. I ask only that the considerable expertise that has provided its input to this process, and the scale of the task in finding consensus across such a broad range of complex factors, be considered as part of any discussion about these proposals.”