MRCVSonline cannot control these cookies from outside sources and we advise you to check with the relevant third party for more information..
Wales to consult on BVD eradication scheme 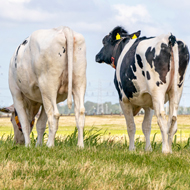 The current voluntary scheme has seen more than 80 per cent of Wales' cattle herd screened for BVD.

The Welsh Government is to consult on proposals for a compulsory scheme to eradicate Bovine Viral Diarrhoea (BVD) in the country.

Under the scheme, cattle keepers would be required to test their herds annually for BVD and take steps to isolate Persistently Infected (PI) animals. Herds that test positive will be subject to movement restrictions until they are clear.

The scheme aims to eliminate PI animals from Welsh herds, which will eventually lead to the disease's progressive extinction. In other regions of the United Kingdom, similar programmes are either being planned or are already in existence.

A current voluntary scheme, due to end in early 2023, has seen more than 80 per cent of Wales' cattle herd screened for BVD. However, PI's under this scheme do not need to be removed from the herd and can be sold on.

Rural affairs minister Lesley Griffiths urged cattle keepers and anyone with an interest in the dairy and beef industries to participate in the consultation.

“We already have a very high take-up in the voluntary BVD scheme in Wales, and the next step to completely eradicate this disease here is to consider making the scheme compulsory,” she said. “As a result of the high take up of the voluntary scheme, many cattle keepers will be familiar with the requirements of testing.

“Eradicating the disease will improve animal health and welfare and improve productivity on the farm.”

For more information and to take part in the consultation, visit gov.wales