MRCVSonline cannot control these cookies from outside sources and we advise you to check with the relevant third party for more information..
Dachshund has face repaired after bad attack 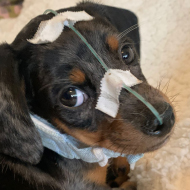 Walter was given a clean bill of health in his six-week checkup.

The puppy had been bitten by his own mother.

A five-week-old puppy has successfully had his face rebuilt after an unexpected and serious attack from his mother left him with a badly fractured jaw and his nose almost entirely detached.

Walter, a dachshund, was taken to the local veterinary surgery to be put down after the tragic incident, but was given a second chance by pet charity Wings and Paws Rescue, who funded the operation he needed.

Clare Vowles, CEO of Wings and Paws, said: “The CT scan at WMR showed the fracture was even worse than we thought.

“His whole nose at the top was detached from his jaw. There was literally nothing holding it together.”

WMR veterinary surgeon Chris Lancelott operated on Walter to stabilise his jaw, and Chris explained that the team removed several pieces of bone that did not have a blood supply.

The team then reduced the fracture and used two converging K wires to pin the bone in place, allowing Walter's bone and soft tissue to heal, and put a nasogastric feeding tube in place, so that Walter would move his mouth and jaw less during the recovery process.

WMR veterinary surgeon Marcin Rogalski commented: “By the time he came in for his six-week post-op check, Walter was eating normally and the jaw looked great with the maxilla appearing to be fully healed.

“All implants were removed and we also extracted two of Walter’s damaged puppy teeth that were unviable. He responded very well.”

Clare thanked the WMR team for their commitment and dedication to Walter, and said: “We also owe a huge thank-you to our social media followers old and new who have raised funds to contribute towards Walter’s treatment. Without your support we would not have been able to save little Walter.”