MRCVSonline cannot control these cookies from outside sources and we advise you to check with the relevant third party for more information..
Cost of living crisis 'biggest single threat to pets', report finds 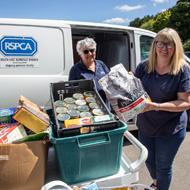 The RSPCA is starting to see the effects of rising costs and is beginning to see an increase in pet abandonments.

Groundbreaking report suggests cat owners are the most impacted and concerned.

The rising cost of living is the most immediate threat to pet welfare, a new report suggests.

The groundbreaking report, entitled the Animal Kindness Index, was conducted by the RSPCA in collaboration with the Scottish SPCA to assess the nation's attitude towards animals.

Of the 4,000 respondents, more than two-thirds (78%) of the public said they think the rising cost of living will impact their animals.

Seven out of 10 expressed concern that the cost of care was increasing, while a fifth said they were worried about how they will afford to feed their pets.

The study, which found that more than two-thirds of the nation describe themselves as 'animal lovers', also suggests that cat owners are the most impacted and concerned about the cost of living pressures.

It comes after similar research by Dogs Trust revealed that two-thirds of owners feel worried, to some extent, about how they will care for their dog as they start to feel the pinch.

Emma Slawinski, director of advocacy and policy at the RSPCA, said: “It’s great that our research has confirmed we are a nation of animal lovers, however we cannot ignore the stark suggestion that the cost of living crisis is the biggest single threat to pets in the UK today.

“We are on the brink of an animal welfare crisis due to the rise in pet ownership during the pandemic, coupled with the cost of living pressures biting - especially those on lower incomes. It’s absolutely heartbreaking."

Emma added that the RSPCA is starting to see the effects of rising costs, as it and other charities had predicted, and is beginning to see an increase in pet abandonments.

She continued: "It’s worrying to see that 33 per cent of pet owners have experienced issues they did not expect with their pets and, sadly, we are now seeing an increase in pets coming into our care, many because owners are struggling to afford to pay for behavioural support, vet care or even to feed their pets.

“The RSPCA and the Scottish SPCA prioritise animals most in need of neglect and cruelty and would urge any pet owners struggling to seek help to address problems at the earliest opportunity so that problems do not spiral out of control.”

Gilly Mendes Ferreira, head of innovation and strategic relations at the Scottish SPCA, added: “We have been lucky so far that we have not seen much of an impact on our services from the cost of living crisis but we are under no illusions.

"We know Scotland is a nation of animal lovers and people will do their best to keep their animals with them, even in the toughest of times. However, we fully expect to see a rise in pet owners who are unable to care for their animals or afford veterinary bills in the coming months due to rising costs."