MRCVSonline cannot control these cookies from outside sources and we advise you to check with the relevant third party for more information..
Dormice receive final checks before reintroduction to wild 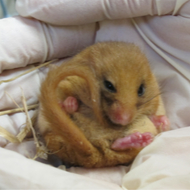 Pictured: a hazel dormouse waking up in ZSL's veterinary hospital.

Endangered British hazel dormice to be released in June.

A group of British hazel dormice, a rare species of mouse at risk of extinction, have received health checks at ZSL London Zoo, before being released into the countryside in June.

The project to reintroduce dormice into the wild is led by the People's Trust for Endangered Species (PTES), of which ZSL is a member.

Thus far, over 1,000 dormice have successfully reintroduced in 13 counties across the UK since 1993.

Soon to be released in an undisclosed woodland location in the north of England, the hazel dormice were checked over by specialist wildlife veterinary surgeons, and had their eyes, nose, ears and mouth checked.

Veterinary surgeons also checked their heart and lungs, abdomen and limbs, and also placed a microchip under the skin of each dormouse, so that each individual could be identified during population monitoring.

“It is important to guard against non-native parasite incursions for example, because they have the potential to cause catastrophic disease and extinctions of native species.

“A prime case being the red squirrel declines in the UK due to inadvertently introduced squirrel pox virus.”

DRAHS wildlife health technician Georgina Gerard said: “Year after year a network of local volunteers continue to monitor these little guys at each site where they have been released and find so many flourishing in their new environment.

“We hope to continue this work for many years to come, helping to bring the hazel dormouse back from the brink and inspiring other conservation projects with this blueprint.”