MRCVSonline cannot control these cookies from outside sources and we advise you to check with the relevant third party for more information..
Study examines risk factors to tortoises during brumation 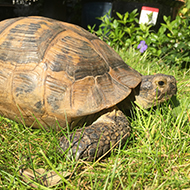 The study found a 7.78 per cent mortality rate during brumation.

Brumation in a garden and uncontrolled temperature reduction before brumation are significant risk factors for morbidity and mortality in tortoises, according to new research.

The term brumation describes the hibernation-like state that cold-blooded animals adopt during winter.

It is a natural part of many reptiles’ annual cycle, but it is also a time most associated with health concerns. Some of the most common include immunosuppression, dehydration, freezing or rodent attack.

Until now, little research has been carried out regarding the hibernation of pet tortoises. The hope is that this new study will provide vital insights that will allow pet owners and veterinary professionals to improve and support safe tortoise brumation.

In the study, researchers collated data on 270 tortoises from 252 completed surveys and used it to evaluate the potential predictors associated with brumation-related death and post-brumation problems.

As well as highlighting the risk of brumation in the garden, the study also found a 7.78 per cent mortality rate during brumation and that 7.22 per cent of surviving tortoises had post-brumation health concerns.

Scientists say their findings, published in Vet Record, highlight the importance of carefully monitoring elements such as temperature and environment for brumation. For example, owners being more vigilant in checking tortoises throughout the cold winter months and keeping heat sources at a height to prevent thermal burns.

Dr Joanna Hedley, a lecturer in exotic species and small mammal medicine and surgery at the RVC, explains: “Unfortunately, little is known about brumation in tortoises in the UK. We hope this research provides much-needed insight into the safekeeping of tortoises during this important period of their annual cycle and will support both vets and pet owners to best look after these delicate creatures.”