MRCVSonline cannot control these cookies from outside sources and we advise you to check with the relevant third party for more information..
Blue Cross helps one-eyed kitten 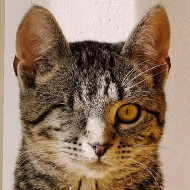 "Even though Candy Cane's steps might seem small, they have been huge for her" - Sarah Miller, Blue Cross.

A one-eyed kitten who came into the care of animal welfare charity Blue Cross has found her forever home after building confidence in a foster home.

Candy Cane was discovered with a painful ruptured right eye, and her veterinary team had to remove the eye in order to make Candy more comfortable.

Understandably, Candy Cane was incredibly nervous and distrustful of humans, and so the charity decided to place her in foster care until she had recovered from her operation.

Foster carer Wendy Penfold took Candy Cane in to her home in Kent, and cared for her as she built her confidence up. Wendy said: “When Candy came to me, she’d lost her trust in humans and was very nervous.

“She would run and hide when I’d come into the room but by the end of her time with me, she became more inquisitive to know what I’m doing and staying in the same area as me.

“After the first week of hardly moving from her hiding hole she discovered the benefits of the tall cat climber in her run where was out of reach and could watch everything going on at a safe distance.”

A regular pet foster carer, Wendy was also caring for another cat named Rita, who she believed helped Candy Cane to come out of her shell.

Wendy explained: “I think Rita helped lure Candy forward in the pen as I would sit and stroke or play with Rita in the corridor so Candy could see I was a nice person with to be around cats.

“A lovely young couple in Hampshire have adopted her that are happy to give her the space and time to see how far she can settle in a family home.

“They understand she may never be a lap cat but want to love her and let her know this is a safe place for her.”

A testament to the love and care of pet foster carers, Candy Cane's small steps toward confidence reflect the great care she has received.

Animal welfare assistant at Blue Cross Hertfordshire, Sarah Miller, commented on Candy Cane's experience: “Wendy has done an amazing job for Candy Cane and even though steps might seem small, they have been huge for her.

"We hope that over time she will build up a relationship and trust with her new owners.”