MRCVSonline cannot control these cookies from outside sources and we advise you to check with the relevant third party for more information..
Charity helps retired police dog to afford emergency treatment 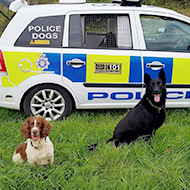 Bailey was on the 'brink of death' when Thin Blue Paw stepped in.

Bailey, a 10-year-old springer spaniel, spent more than eight years at Humberside Police, working as a cash, drugs and weapons detection dog. Joining the force at 14 months old, he was later partnered with PC Chris Wright.

When Chris left the section, the unit decided that both Bailey and Chris's general purpose dog, Pedro the German shepherd, could retire and live with him.

Chris was determined to adopt his two partners as pets, but the cost of two older former police dogs, who had led strenuous working lives, would be his responsibility.

“When a former colleague told me about the Thin Blue Paw Foundation, I registered both dogs right away,” he said. “I hoped I’d never need to call on them for help, but it was a weight off my shoulders to know they were there.”

In early April, Chris found Bailey collapsed in his kennel surrounded by vomit and diarrhoea and took him straight to the veterinary clinic. Bailey stayed there for six days, and the veterinary surgeons suggest euthanising him as an option.

After Bailey began to recover, he was diagnosed with Cushing's disease, and Chris was faced with a bill of £1,500.

That's when Thin Blue Paw stepped in. Chris said: “We’re just so pleased that Bailey pulled through and that he’s now back home and recovering well.

“I had assumed that I’d cover the bill and was in a fortunate position where I had the funds if needed, but I was thrilled when the Foundation offered to cover the bill.”

Dave Wardell, Thin Blue Paw trustee, explained why the foundation offers this support to dogs like Bailey: “While those of us with pet dogs can take our insurance policies to help us should the worst happen and our beloved dog need life-saving treatment; it’s almost impossible to insure retired police dogs due to the strenuous working lives they’ve led.

“We founded the charity because we wanted to ensure that no owners, like Chris, would be in a position where they’d have to choose between putting food on the table and paying their bills, or paying for treatment for their dog.

“These dogs are unsung heroes who have dedicated their lives to fighting crime, bringing criminals to justice, and keeping the public safe. The least they, and their owners, deserve is a happy and healthy retirement.”