MRCVSonline cannot control these cookies from outside sources and we advise you to check with the relevant third party for more information..
Dog photographer wins prestigious award 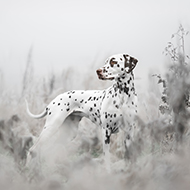 A dog photographer – or should we say, phoDOGgrapher – has been named the 2022 International PhoTOGrapher of the Year at the 2022 TOG Awards.

Sophia Hutchinson, a photographer from Warwickshire, took home the $500 cash prize for her photograph of a Dalmatian named Amber.

The TOG Awards, organised and administrated by That Photography Spot, is entered by photographers from 24 countries worldwide, and judged by three highly-respected professional photographers.

Jessica McGovern, one of the judges, commented on the incredible photograph of Amber: “To achieve one of the top scores in The TOG Awards is a serious achievement, but to gain the highest collated score across nearly 700 entries is remarkable. We can only see great things to come for Ms Hutchinson, whose imagery was truly stunning.”

You can see more of Sophia's pawfect dog portraits at petsbysophia.com