MRCVSonline cannot control these cookies from outside sources and we advise you to check with the relevant third party for more information..
Sugar glider discovered in a London nightclub 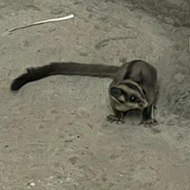 The sugar glider was rescued from the nightclub, and transferred to a specialist keeper.

The lost party animal was rescued by the RSPCA.

A lost sugar glider became a party animal on Sunday 23 January, when it was discovered in a nightclub in South Kensington!

The little marsupial shocked nightclub staff when they discovered him inside the club in the middle of the afternoon, and took him to the vet, who contacted the RSPCA.

Mike Beaman, RSPCA rescuer who collected the sugar glider, said: “This little guy was found inside a nightclub in the middle of the afternoon. Either he was a little early to the party or somehow he has escaped and is a lost pet.

“This sugar glider wasn’t too friendly but had clearly been kept as a pet. They are cute animals and it’s easy to see why people might be tempted to buy sugar gliders as pets but we would urge them to reconsider; these animals need very specialist care and we don’t believe they are suitable as pets.

“Unfortunately, we do see these sorts of animals escaping or being given up from time-to-time when their owners realise how difficult it is to meet their needs in a household environment.”

The sugar glider has been transferred to a specialist keeper in Peterborough, and the RSPCA are warning the public about the complex needs of exotic pets, reminding them that the needs of sugar gliders are so difficult to meet in a household environment that the creatures do not make suitable pets.

Mike added: “They are nocturnal animals who need to be allowed to sleep during the day and to be awake and active at night. They must be fed an appropriate diet and be provided with UVB light in captivity, to prevent metabolic bone disease.

“They are arboreal, meaning they spend their lives up in the trees, and can glide for 50m or more, which would be extremely difficult to provide for in a typical home.

“They’re also incredibly sociable so should never be kept on their own, and can live for over 10 years.”